As usual, I will start this post out with apologizing for not posting sooner. It has been almost a full month since I updated everyone…I am very sorry.

These last few weeks have been wonderful, and sad, and happy, and insane…as usual…filled with every emotion.

One day Remmington decided to become a big girl. She decided to grow up in one big swoop. I walked into the hospital that day and saw that she was breathing room air. And other than one minor set back since that day…she just decided that she was ready to blow that joint. She was so done with living in that hospital. We thought surely her due date (Feb 28th) was the earliest to hope for either of the girls to come home. They had repeatedly told us with all that they had been through…we should suspect even later than their due date. HA! Remmington had other plans.

One of the main hurtles for preemie babies in the NICU is teaching them to eat (Im sure Ive mentioned this countless times before) …but the suck swallow breathe combo can be quite difficult to grasp. Well, although some babies’ stay is prolonged by weeks trying to eat and gain weight….Remmington and Blue had not an issue with eating. They each just wizzed through the stages of oral feeding…and were taking everything by mouth and gaining weight consistently in no time. HOORAY.

Once Remmi had mastered this concept, she thought, “why not start breathing on my own and keeping up my body temperature all by myself and not get sick anymore and go home? Yes…I think that’s what I’ll do. ” And that my friends is EXACTLY what she did.

About two weeks ago they let Garrett and I spend the night at the hospital in a room alone with her to prepare us to bring her home and get comfortable knowing that she would make it through the night. Basically learning to trust her and ourselves. She was still on a monitor that night, although she had no oxygen on her. She was due to go home two days later. Garrett and I were both a little sketchy on bringing her home as she still didn’t seem quite stable enough to us (but…since she had met all the requirements for graduating the NICU, insurance was bound and determined to kick her out.)

We prayed that God would let something happen while she was still in the hospital if it were to happen at all. Well, as always, he answered. She had a minor apnea spell the night we slept with her. She basically just forgot to breathe for a few seconds at a time, and eventually stabilized herself after five min or so. But, we were so lucky that happened, because that bought her another seven day stay in her hospital suite. Each baby has to go seven days without any “spells” before they can go home. Now, don’t get me wrong we desperately wanted her home. But not until she was ready. And also…we hate leaving Blue behind.

The next seven days passed without incident and she seemed to become more and more stable with each passing day. Like she was literally just being babysat in the hospital. My fears of something happening to her began to decrease as she became better and better on a daily basis at maintaining her oxygen saturation. When they told us that we really would be bringing her home….this time i felt ELATED and not so scared.

After 73 days in the hospital our baby angel came home. Driving the thirty min from the hospital was one of the most surreal experiences of my life. She has now been home almost a week…and although I’ve never experienced this level of exhaustion before (with being a new mom who was used to sleeping however much I wanted…to being up all night and then visiting Blue late into the night when Garrett gets home) I am truly the happiest I have ever been. 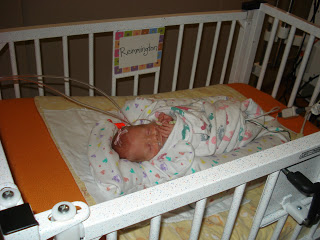 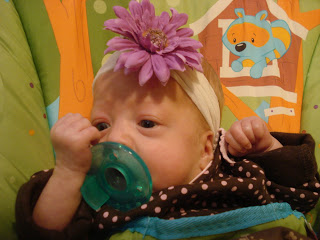 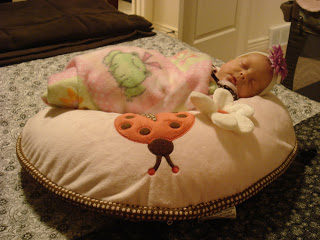 I love walking down the hall to her bedroom. I love carrying her around the house…and not having cords trailing behind….I love feeding her all day long….I love hearing her little whimpers in the sounds of our home…I love the spirit she has brought here….I love feeling like a real mom and having bottles around the house and diapers in the garbage and little tiny clothes mixed into our big people laundry. I love being Remmington’s mom. She is precious and beautiful and wonderful and everything I’ve ever wanted. God is miraculous. I know he brought her home unharmed and healthy. He is so amazing. I’m so glad to know Him and that He knows me and that this whole situation has only made our relationship as father and daughter stronger.

Like everything in life…there is usually a down side. Leaving Blue behind tears at my heart every time I’m at home smiling with Remmington. I miss her. It is so hard to only be at the hospital an hour or two each day instead of hours on end. I hate missing things she does throughout the day, and not knowing how much longer it will be before our family is complete.

She has had a hard road…and these last few weeks haven’t been any easier for her. She was diagnosed with the first signs of retinal detachment from prematurity. When babies live on supplemental oxygen too long, often times it will severely damage their eyes. We thought we had passed this obstacle, but unfortunately her eyes progressively got worse and worse. They had to perform laser surgery last Wednesday. This involved intubating her all over again, and feeding her through her tube all over again…and just a major set back from all the progress she has made. We were so sad she had to go through this. The doctor said her eyes have stopped getting worse…but haven’t shown much signs of improvement yet. By next week we’ll know if she needs more surgery. More than likely both the girls will have severe vision problems. But I pray that Blue will at least have her sight…even if it isn’t the best.

She is doing well though now. And the past few days has seemed back to her chipper self. She’s had some minor dryness from the oxygen in her nose for so long and it was interfering with her breathing…so they took out her canula (or nose tube) and put her in a head box. It is the funniest thing I have ever seen, and promise I will post pictures soon. But it is exactly what is sounds like. A plastic box that they set over her head, with a little hole cut out for her neck. They keep it very humid. So she basically is sitting in a plastic bubble with water dripping down the sides. And the funniest part is that it has a lid. So I can pick up the lid…just like I would a serving dish full of mashed potatoes and I can peek in at my baby. I was in hysterics with the nurse last night. It is just too funny. 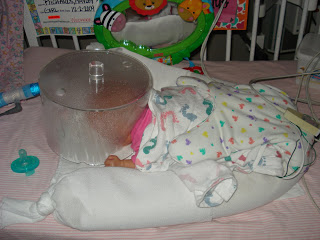 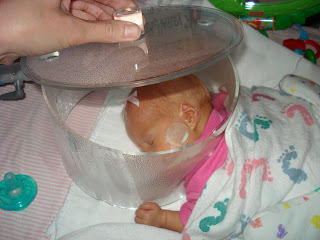 My husband just walked in from a long day of hard work. He visited Blue on his lunch break. I will now leave my darling little Remmi who is napping on the bed beside me in his care. And off to the hospital I go.

Thanks all for checking in!

I remember this day so vividly. I have never experienced so many emotions at once. I know quite a few people personally who have carried multiples, and lost one. This experience of leaving Blue behind gave me the tiniest taste of that roller coaster. Pure elation mixed with utter devastation. To those of you who have lost…. I love you. I pray for you. And most of all I admire you.

One thought on “Got a baby IN the house!”