How very badly I wish I had photographs of each of the “design” choices I’ve made over the years. (don’t worry…I did find some!)

Remember how I told you my dad was a house painter? It’s true.  Although, I do believe he graduated from BYU with a degree in financial planning or something similar… I honestly cannot even picture the present day version being able to converse with his college self. He’d probably tell him what a sell out he was, followed by a slew of socially unacceptable slurs.  BUT, I digress.. 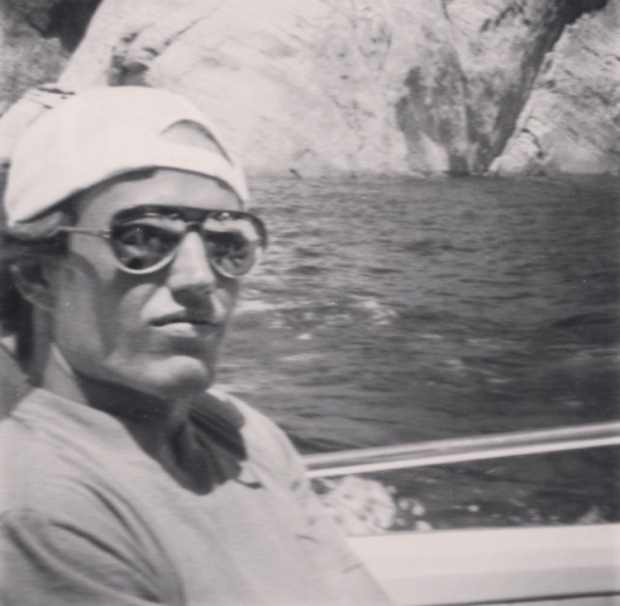 Many times he’d let me or a brother tag along to learn the ropes of his trade.  Usually a brother. He tends to think boys can outrun girls in most departments. I’d like to think my sister and I have proven him wrong over the years.

When life was stable enough that he was holding down a job…he’d load us and his supplies in the truck, with a dog or two in tow. We’d stop off at a 7-11 for a gourmet one dollar hot dog doused in chili cheese from those squeeze machines.

I’m sure that’s the only real reason I ever got in the truck.

His niche was residential homes, small jobs, interior. Sometimes an outside deck or two.

Occasionally he did not only work on the premises, but he’d go ahead and “squat” there as well. Who would ever know? Maybe it had nothing to do with not having anywhere to live, but he  just wanted to go above and beyond and watch the paint dry.

And music. He always, always had his music.

Point being…. I was immersed at a very young age in the art of paint. 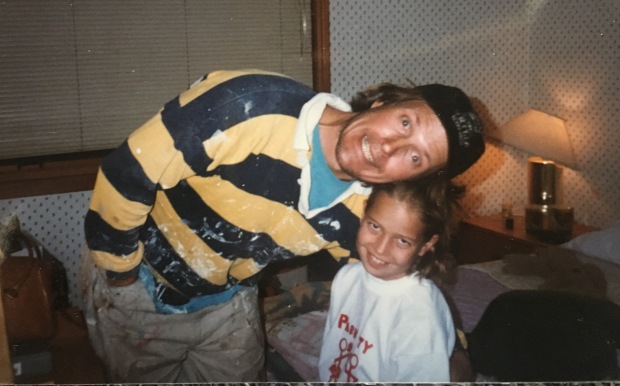 (his hands and clothes always covered in paint)

We’d mostly do the grunt work. Miles and miles of blue tape. Carrying buckets around. Tuning the radio.

But he always made us feel like there was no way he could finish the job without us.

(He’s still at it…teaching my daughter and my niece how to paint last summer.) 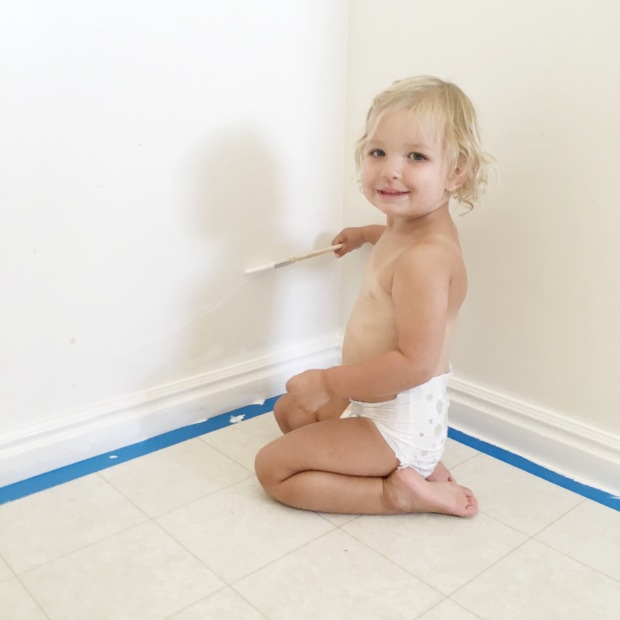 That’s the thing about my dad… for all of his human weaknesses…he was blessed with some pretty fantastic strengths. He is a patient and encouraging teacher. He is never quick to anger. And if you met him, he would buy you as many hot dogs as his wad of cash could afford.

He also ALWAYS let us kids do what we wanted. Being a parent now myself…I realize that’s a TERRIBLE idea. (Thank goodness my mom was willing to give us some rules.)

But my creativity soared. And I owe a large part of that discovery to my dad.

I guess it’s pretty ironic thinking about what our tenants did to our current home, considering the terror we reigned down on many of the landlords growing up.

When I was 11, he let me paint my room however I wanted. Mind you, I lived with my mom, so I’m sure she was thrilled when she came home to….

two lilac walls, two baby blue walls, and a florescent orange ceiling. Come on guys!!! I just couldn’t decide, so we went with all three! He then had me put my hand prints in orange on the closet wall. Just to make sure our landlord really hated us.

When I was 16, I went with all four walls in pastel yellow, with dried roses scotch taped all across one wall, and a border of black and white checkered squares sponged on with home made stencils boxing in my ceiling. (I remember being REALLY proud of this one!)

(We must have been planning on painting that ceiling, but never got around to it.  No way my dad would have let us leave it like that!)

At 17, my mom purchased her first home!! And my Aunt Karyn (She herself has a wonderful eye for design) came to help us move in. By this time three of my older siblings had moved out, so I not only got my OWN room, but my aunt took me to the store to buy my very own bedding and decor. I went with pinks and browns and EVERYTHING matched. I remember this feeling so surreal.  This was my first 100% “designed by me”  nook. 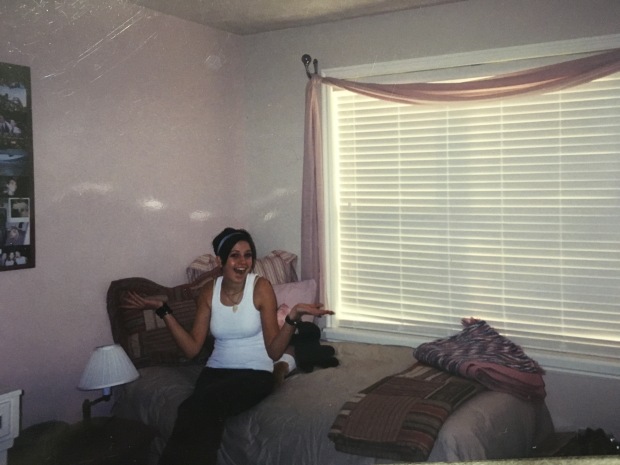 When I was 18, it was all the rage to have wooden chair railing and other fancy moldings (or at least I seemed to think so.) But not being able to afford that, I “borrowed” about 400 paint sticks from a paint supply store and nailed each one into my wall. I created an intricate design of squares filled with different paint colors including mustard yellow, maroon, and sea foam green, I believe. (oh dear)…I searched high and low and cannot find a picture, which is so unfortunate for you guys.

By 19, I was living in my own rental with roommates, dealing with my own landlords. So naturally I decided to GLUE tissue paper all over my wall, and seal it in with metallic gold paint. I really wanted that textured look, ya know? I went ahead and potty trained a puppy in that apartment too. The more I reminisce, the more I’m realizing the karma that has taken place.

When I was 25, my sister had her first baby,  and I convinced her to decoupage scrapbook paper to her wall because it was cheaper than wallpaper. Thank goodness her husband was her landlord 😉 he loooooved that. 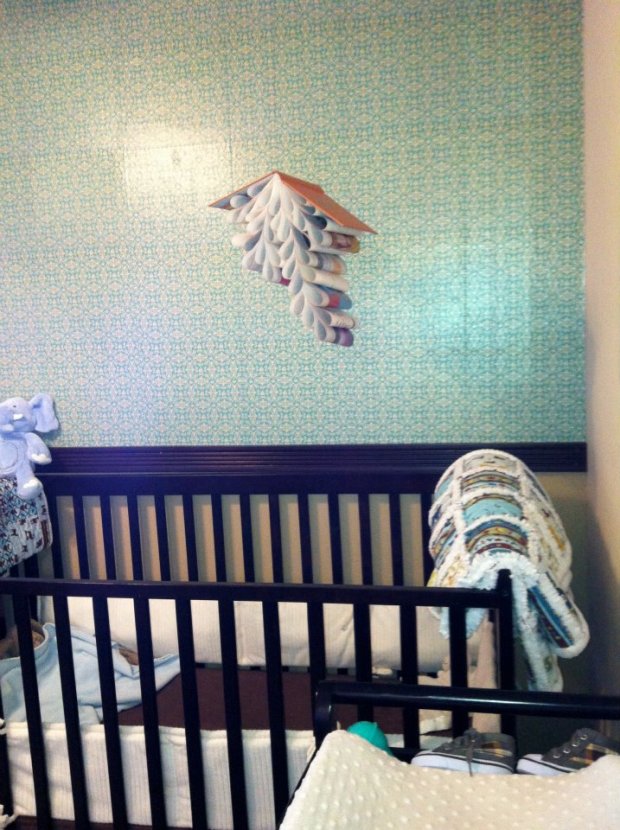 Anyone want to hire me yet??

The older I get, the more I realize how blessed I was growing up…

I may have had a father with some life controlling addictions.

I may have had the cops at my house more times than I can count.

I may have had a mother who was forced to work three jobs at a time.

I may have lived with friends for a short time while some of my family lived in a tent.

I may have constantly found my hard earned money replaced with “I O U” notes.

BUT …. I had more support than most of my friends with “normal” dads.

I could tell either of my parents and all four of my siblings all of my secrets and concerns, and received nothing but unconditional love in return.

I knew exactly who I was.

And I was always taught to be proud of that.

Trust yourself. Do what YOU love. Don’t be afraid to TRY. And let your freak flag fly!

I will still unconditionally love you.

3 thoughts on “my apprenticeship”